Krystal is a writer exploring family photography, food and travel. As a new resident of western South Dakota, she loves the local music scene and brings a fresh perspective to marketing Rapid City as a worthwhile destination in any weather. Krystal is first in line on Independent Bookstore Day and last to leave the disc golf course.

One of the worst floods in U.S. history descended on the Black Hills of South Dakota in the middle of the night on June 9, 1972. In the aftermath, the community gathered to rebuild, and today you can visit local parks and museum exhibits to learn more about the unforgettable impact this flood had on Rapid City.

Early weather reports warned of scattered showers and thunderstorms, but extraordinary weather conditions created a tragic turn of events. Severe thunderstorms swept across the area and dumped more than 10 inches of water in less than 12 hours over just 60-square miles. Torrential rain transformed Rapid Creek into a wild torrent  while residents slept.

By 11:15pm, the creek waters reached 15 feet 9 inches… and then the Canyon Lake Dam failed, sending floodwater rushing into Downtown Rapid City. Raging water washed out roads, crashed through or moved homes, carried away vehicles, and remade the landscape. Within a few hours at least 4,000 people were reported missing. 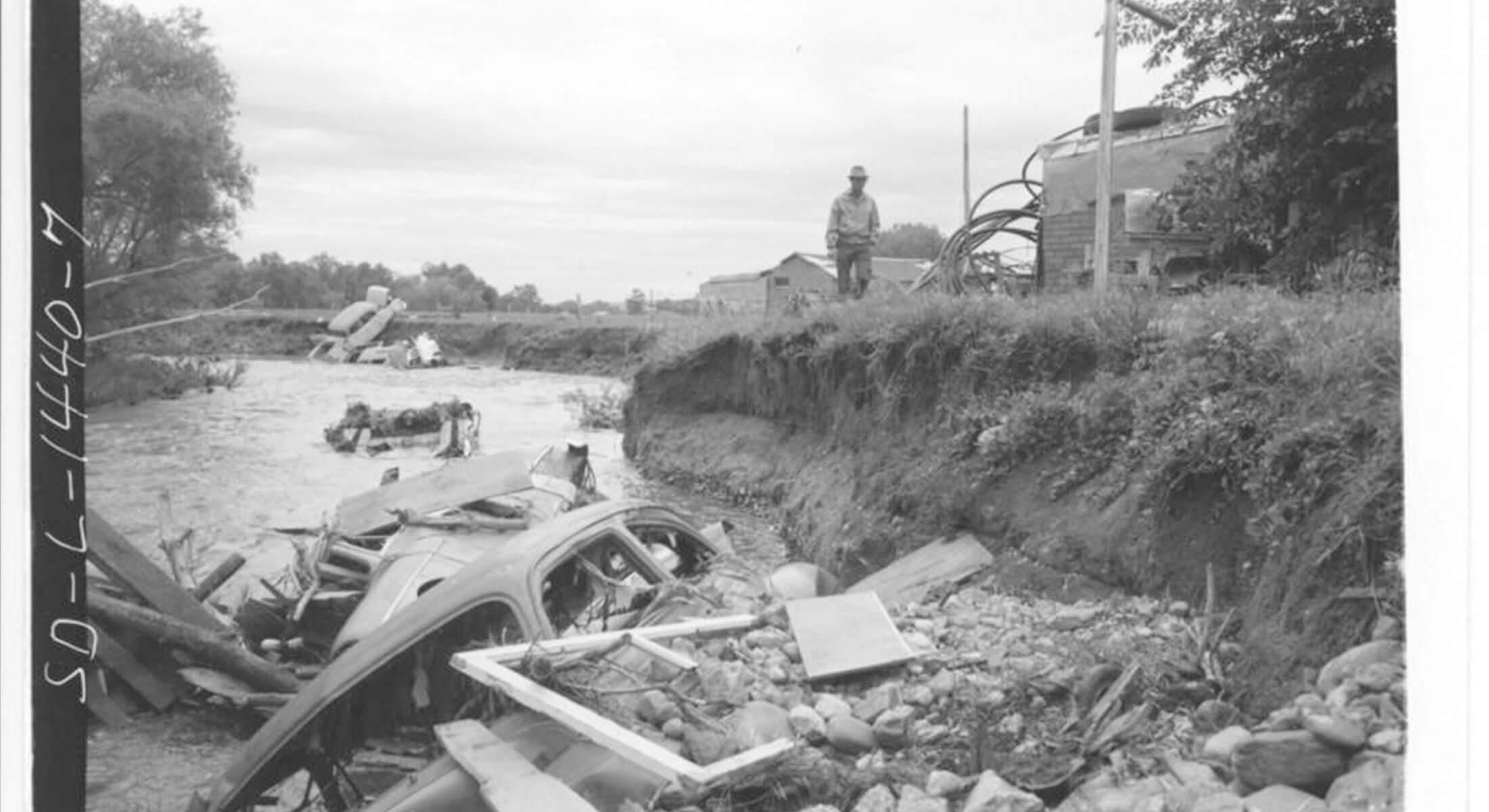 In the midst of chaos and confusion, volunteers banded together to search for missing persons, recover bodies, gather supplies and water, prepare and distribute meals, and clean up debris. 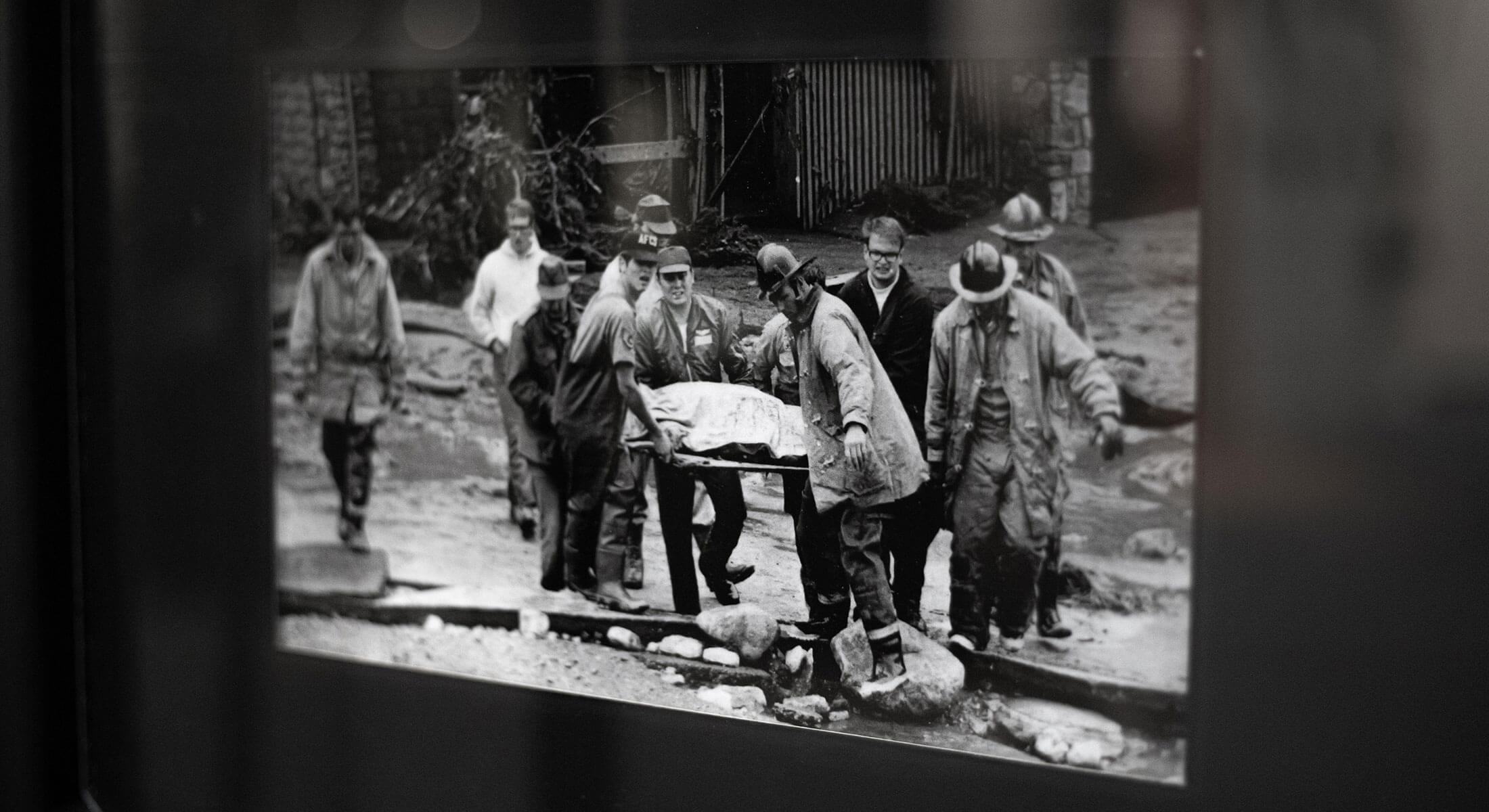 The Journey Museum and Learning Center

Taking immediate action on the night of the flood, a coordinated community response among city, county, and school officials allowed the use of more buildings to care for people. Camp Rapid and Ellsworth Air Force Base opened their gates to provide essential needs like shelter, food, and water as local military members joined rescue, recovery, and cleanup efforts. Mount Rushmore National Memorial was even opened and used as a shelter for nearby community members seeking safety.

By morning on June 10, 1972, news of the flood shocked the world because of how quickly disaster struck – resulting in loss of life, destruction of homes and businesses, fires from ruptured gas lines and more.

In the aftermath of the flood, the Rapid City community gathered to rebuild. The youngest mayor in the city’s history (at only 29 years old) worked with city council to make plans for redeveloping the affected areas, establishing a designated flood plain to prevent a re-occurrence of this tragedy. The citywide Urban Renewal plans defined acceptable uses of this area to include low flood-loss potential such as expanded parks, pedestrian paths, community gardens, parking, and recreation. 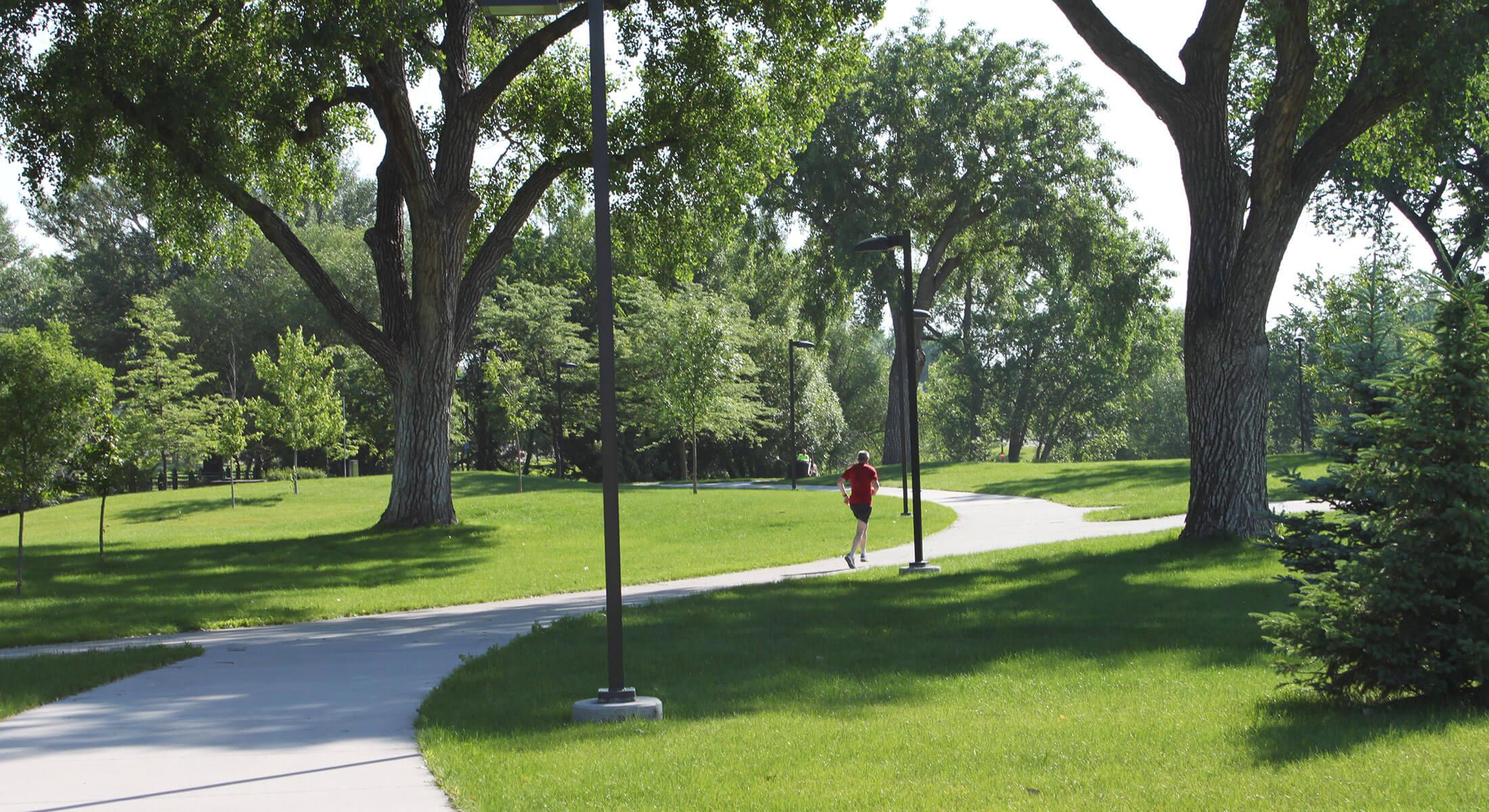 As a result, 600+ acres of green spaces and public parks were created, including a beautiful bike path that runs alongside Rapid Creek. Memorial Park was created in the city center – cultivating flower gardens, a lovely water fountain and memorial to remember the 238 community members who died during the disaster. 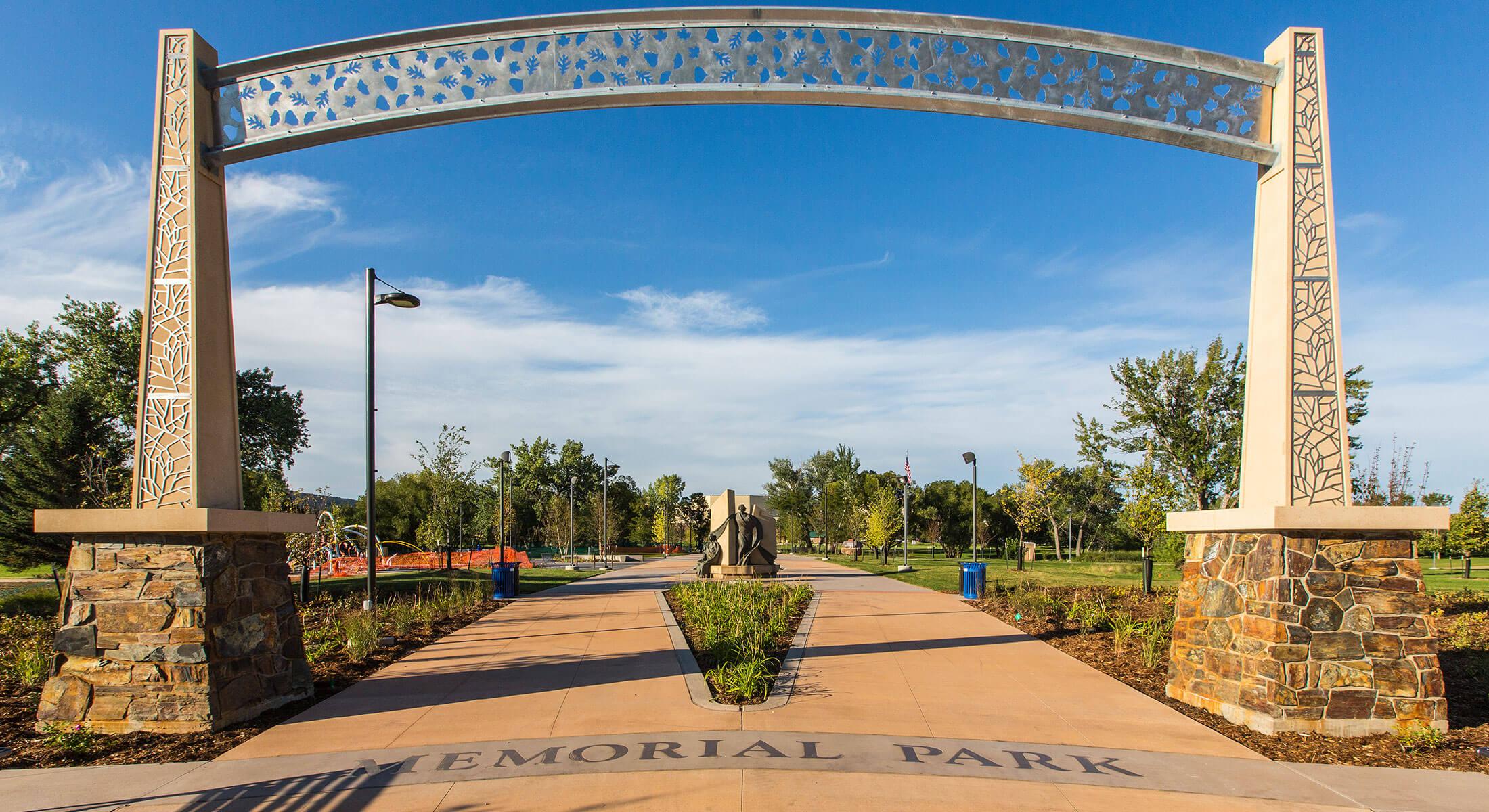 Today, visitors can see memorials and unique exhibits, such as the one found at the Journey Museum & Learning Center, throughout Rapid City commemorating the lives lost and tragic events of the 1972 Black Hills Flood.

In June 2022, Rapid City is commemorating the 50th anniversary of the flood with a community events program, a series of podcast episodes featuring survivor stories curated by local librarians, and a dedicated special exhibit open through October 10, 2022 at The Journey Museum & Learning Center. You can learn more about the unforgettable impact of the flood on Rapid City and the surrounding communities through poignant pictures of volunteers sifting through flood damage, a visual display of the 12-hour timeline of events and a vibrant wall of colorful images depicting the Rapid City greenways created and protected after the flood. 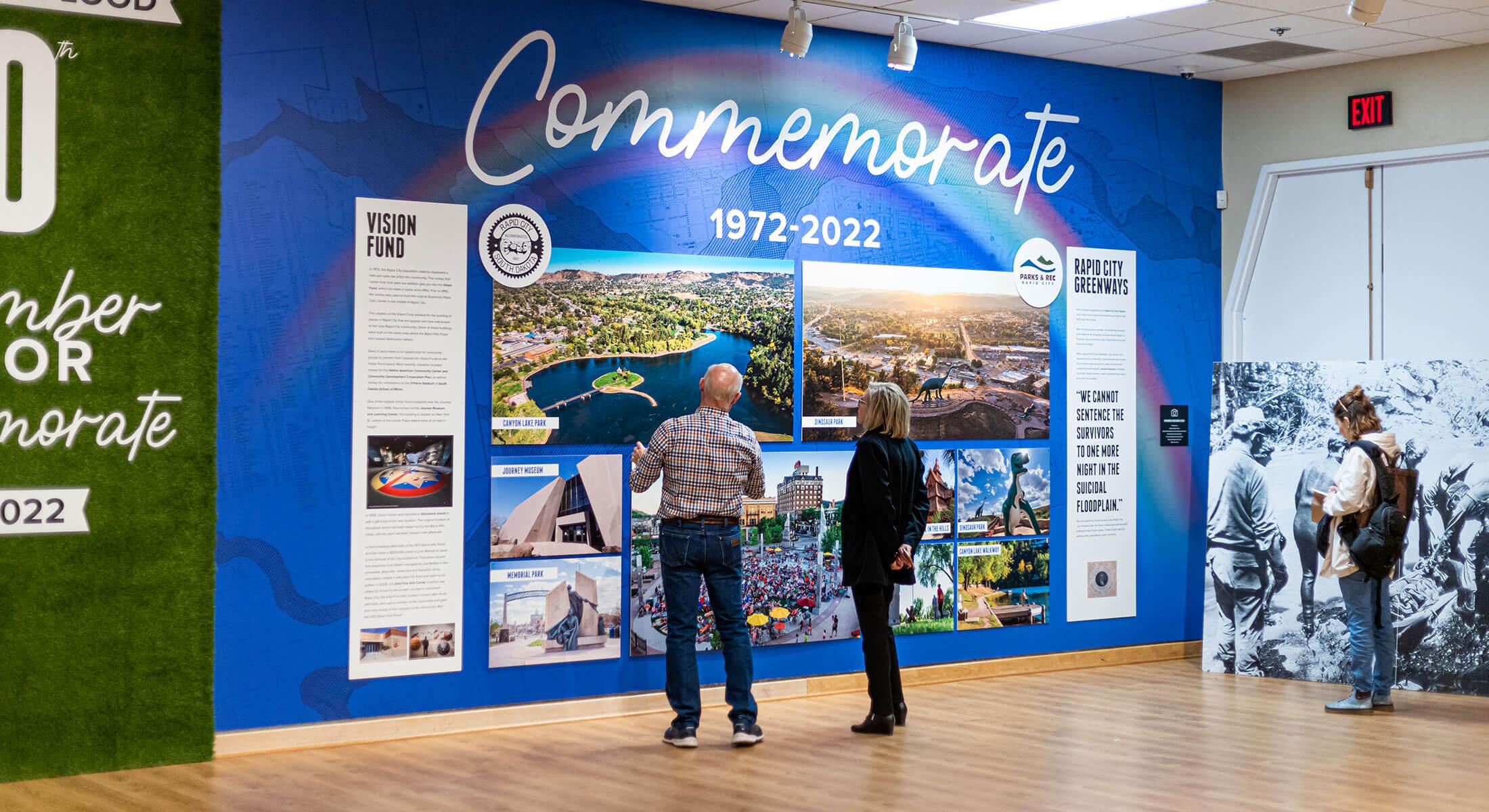 Sadly, the original Storybook Island was demolished by swiftly moving water and debris; however, many of the character figurines were recovered, restored, and put back on display in the park’s current location. You can find a flood marker at the entrance of the park.

Walk, run, or bike along Rapid Creek and stop to read a series of informational plaques on your way to one of Rapid City’s oldest parks – Canyon Lake. Here you can find a flood marker showing how high the water levels reached during the flood. Spend time experiencing the beauty of this city park, which represents the past, present, and promising future of Rapid City. 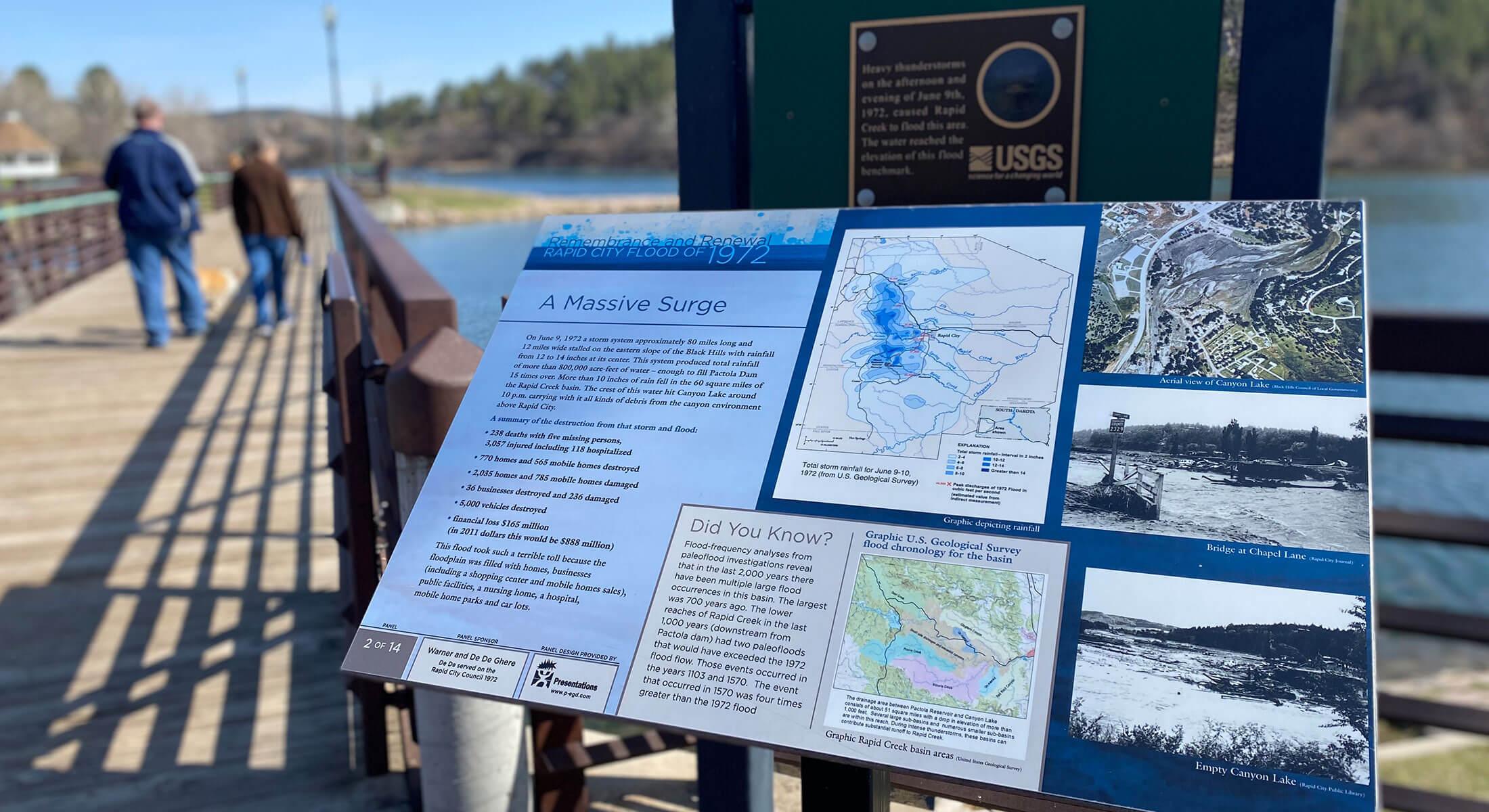 The legacy of the 1972 Black Hills Flood established many of the open recreational spaces in our community and Rapid City's parks are hidden gems for any visitor. Be sure to explore our Top 10 Parks when you visit.

What To Do At Crazy Horse Memorial