How A Depression-Era Park Became A Favorite Rapid City Attraction

If you’ve been to Rapid City before, you’re likely familiar with a green brontosaurus straddling the skyline. If you’re a local, he might feel like a close friend. I fall into the latter category. Dinosaur Park was a favorite of mine growing up and it’s become a go-to experience for my tiny humans today. What I didn’t know so many years ago, is just how special this attraction truly is and it’s crucial role in the development of the area. Sure, to first timers it may look like an unusual hill with seven concrete dinosaurs – but it holds way more meaning than that.

In 1936, during the Great Depression, work began on the 80 foot long brontosaurus and four of it’s neighboring friends. Emmett Sullivan, among many that worked on the carving of Mount Rushmore, was hired to construct the massive beasts after found dinosaur bones and footprints in the area. It was an idea that served as a strategy to capture traffic drawn to Mount Rushmore and marked the beginning of Rapid City’s transformation from pass-through town to must-stop destination. During construction an office building, used during the historic Stratobowl hot air balloon launches, was relocated to the park and remained there through completion of the adjacent Skyline Drive. Originally, five dinosaur species were selected to represent the giants that roamed the Western United States. Later, the group became seven when two additional, smaller dinosaurs were added near the park’s gift shop. Sullivan constructed the dinosaurs out of metal pipe frame, wire and concrete and chose to paint them gray. It wasn’t until the 1950s, after the sites dedication that they were given the cartoon-ish color scheme you see today – green and white. 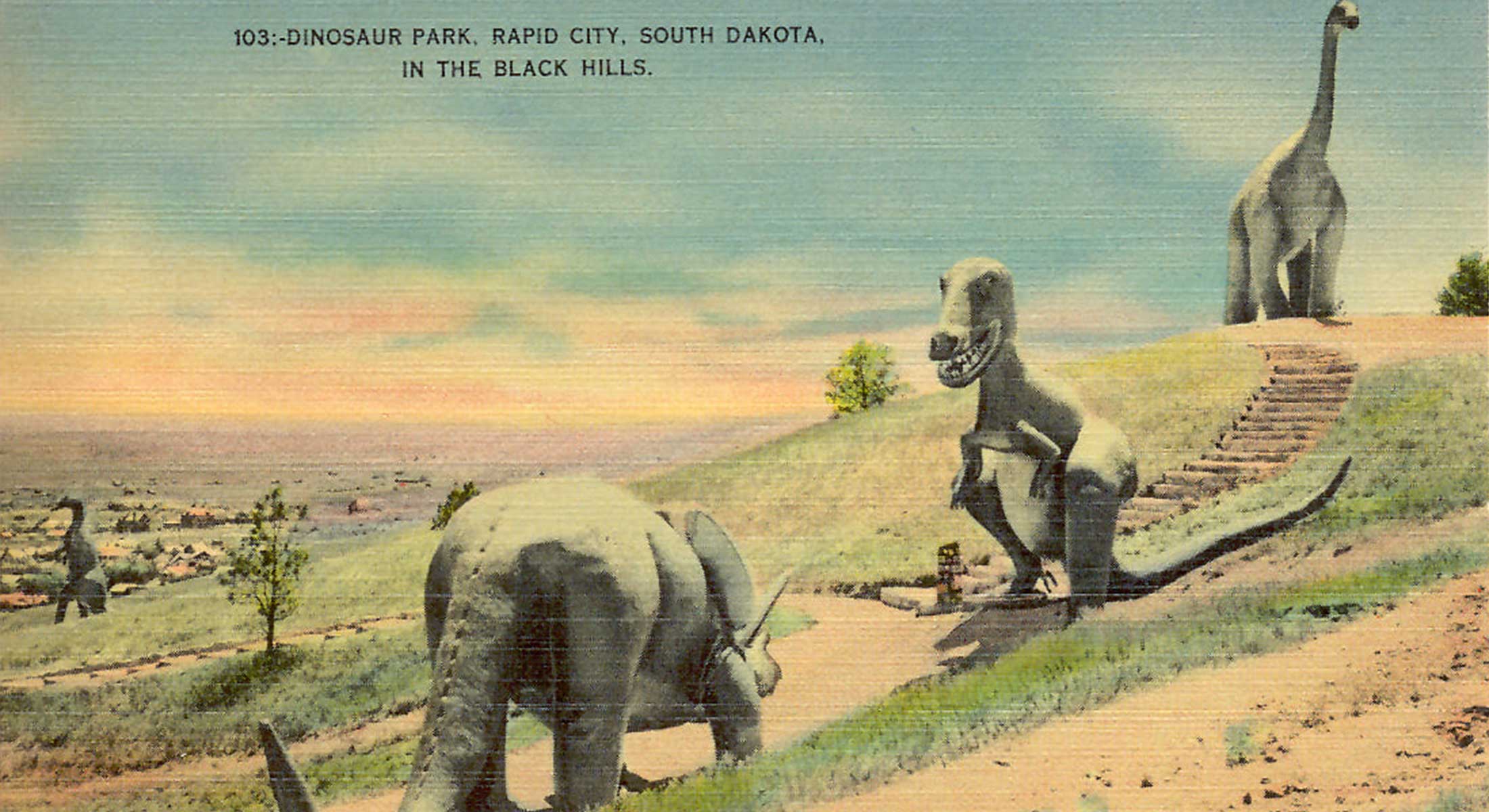 Little-known fact: Every city has a dark past. The ridge where Dinosaur Park is located was once known as Hangman’s Hill. You can imagine what happened here. In 1877, three horse thieves, two guilty and one who rode into town with the wrong folks, were captured and brought to the hill. The remnants of the tree can still be seen and is now a grim symbol of the past.

Over the years, the most famous of the seven dinos, the brontosaurus, has grown to become a symbol of the city – and rightfully so. He witnessed the preservation of Badlands National Park by Theodore Roosevelt in 1939 – which you can see from the summit of Dinosaur Park if you turn your gaze east. From the west, he likely heard the first blast on Crazy Horse Memorial® as work began in 1948. During a period of the Cold War in the 1960s, he watched as a missile field, containing 150 Missile Silos, was constructed not far from his perch. One of those silos operates as a museum today. Later in 1972, our green friend watched the devastation of a flood – the worst natural disaster in South Dakota history – wipe out our community. And out of that devastation, he saw the birth of a reshaped city. Recreational gems and beautiful parks appeared in remembrance of the flood, including the city bike path, Memorial Park and Founders Park at the base of local favorite, M Hill. The beloved children’s park, Storybook Island, was also enhanced and reconstructed. And in 1990, Dinosaur Park earned its place on the National Register of Historic Places.

Today, Dinosaur Park is the only destination in the area where you can actually climb on dinosaurs. I imagine you won’t have any issue convincing your children to visit this park. But if you do, this is the sell. Rapid City does have a few museums with actual Dinosaur skeletons, but your kids won’t be able to climb them (my three year old has asked). It’s also quite safe to climb – and not just because they don’t move. While their scale is generally correct, they weren’t ever created reflecting the true dinosaur anatomy. Natural elements and aging have also degraded some of the sharper features, like the teeth on the tyrannosaurus rex and tail spikes on the stegosaurus. But not much else has changed. The park is also free, which makes it easier to say “yes” to persistent family members.

If the dinosaurs are the main draw for the children, the 100-mile views boost the experience for adults. From the top, you gain a great overview to the western region of South Dakota comprised of dense pine forest and rolling plains. Rapid City’s location at the base of the Black Hills gives visitors at Dinosaur Park a visual of these two very different forms of terrain. If you are there for lunch, consider grabbing snacks from the park’s concessions or a meal to-go from one of our local restaurants. There is a patio at the base of the park with picnic tables provided by the gift shop during the warmer months – May through September. Or, on the hill, you’ll find a few benches, grass and a couple of flat rock areas. Afterall, food tastes better with a great view. 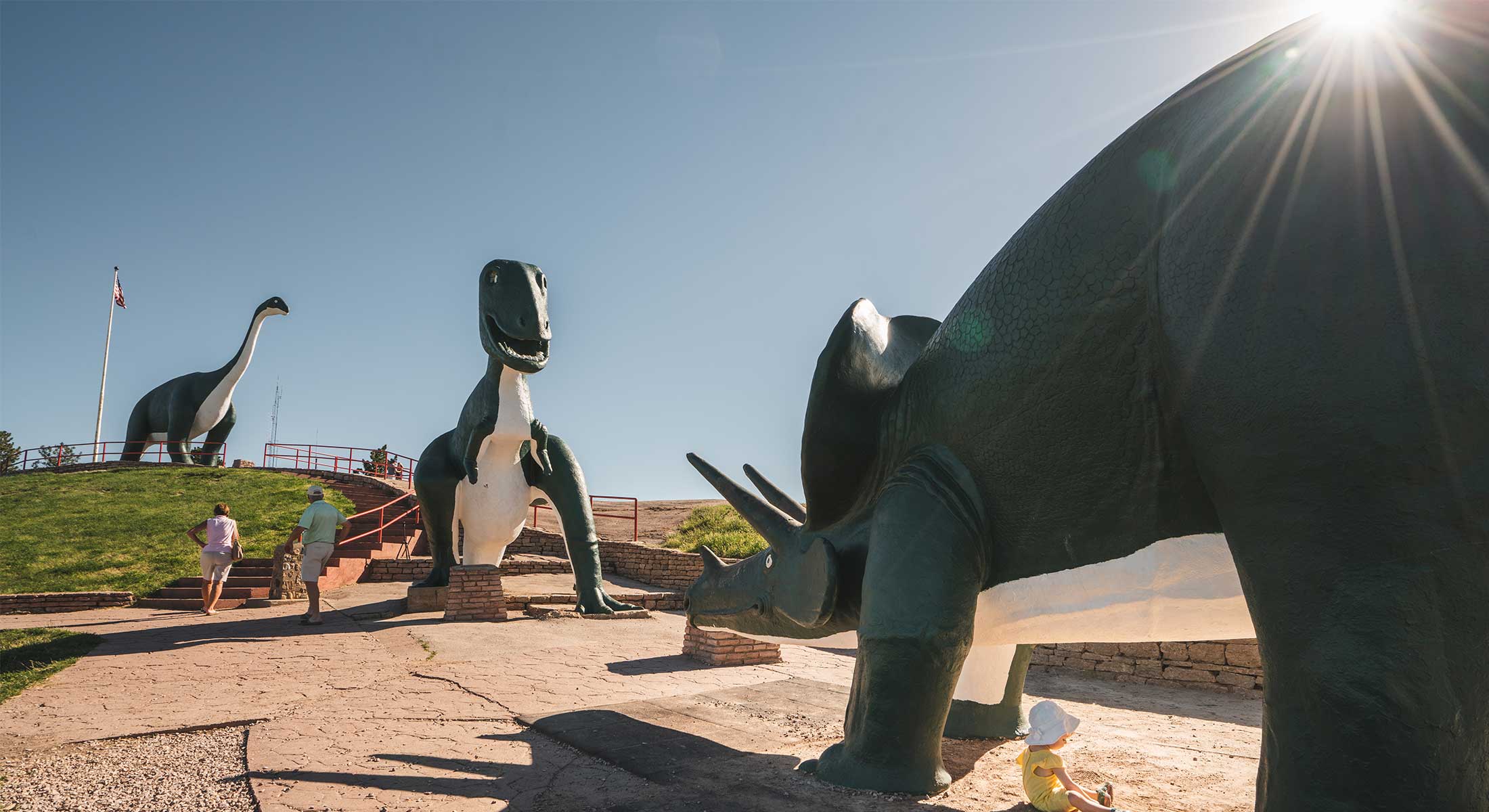 Speaking of great views, Dinosaur Park serves as a trailhead for Skyline Wilderness Trail – a 150-acre wilderness with excellent hiking and biking.

When I was a child, the gift shop at Dinosaur Park Visitor Center was my favorite place to purchase rocks for my collection from the Dinosaur Gem Mine. Typical kid. Revisiting today, I can assure you the interior of this building is completely unexpected and pretty incredible. Besides the Gem Mine, kids can take home “hatching dinosaurs”, educational books and other dinosaur themed memorabilia. Art pieces, large geodes and local Black Hills apparel also create the perfect souvenir or gift.

From the parking lot, access to the reptiles takes the form of a long flight of steep stone stairs and low railing. For many years, this has been a challenge for some visitors. Future enhancements at Dinosaur Park are set to begin in 2022 and include accessibility improvements to viewing routes and upgrades to visitor amenities.

A Trek Through Time