7 Iconic Landmarks Of The Black Hills

You’ve probably heard about them, noticed them on your scenic drives, or walked for miles just to reach them, but how much do you actually know about these iconic landmarks found in the Black Hills? 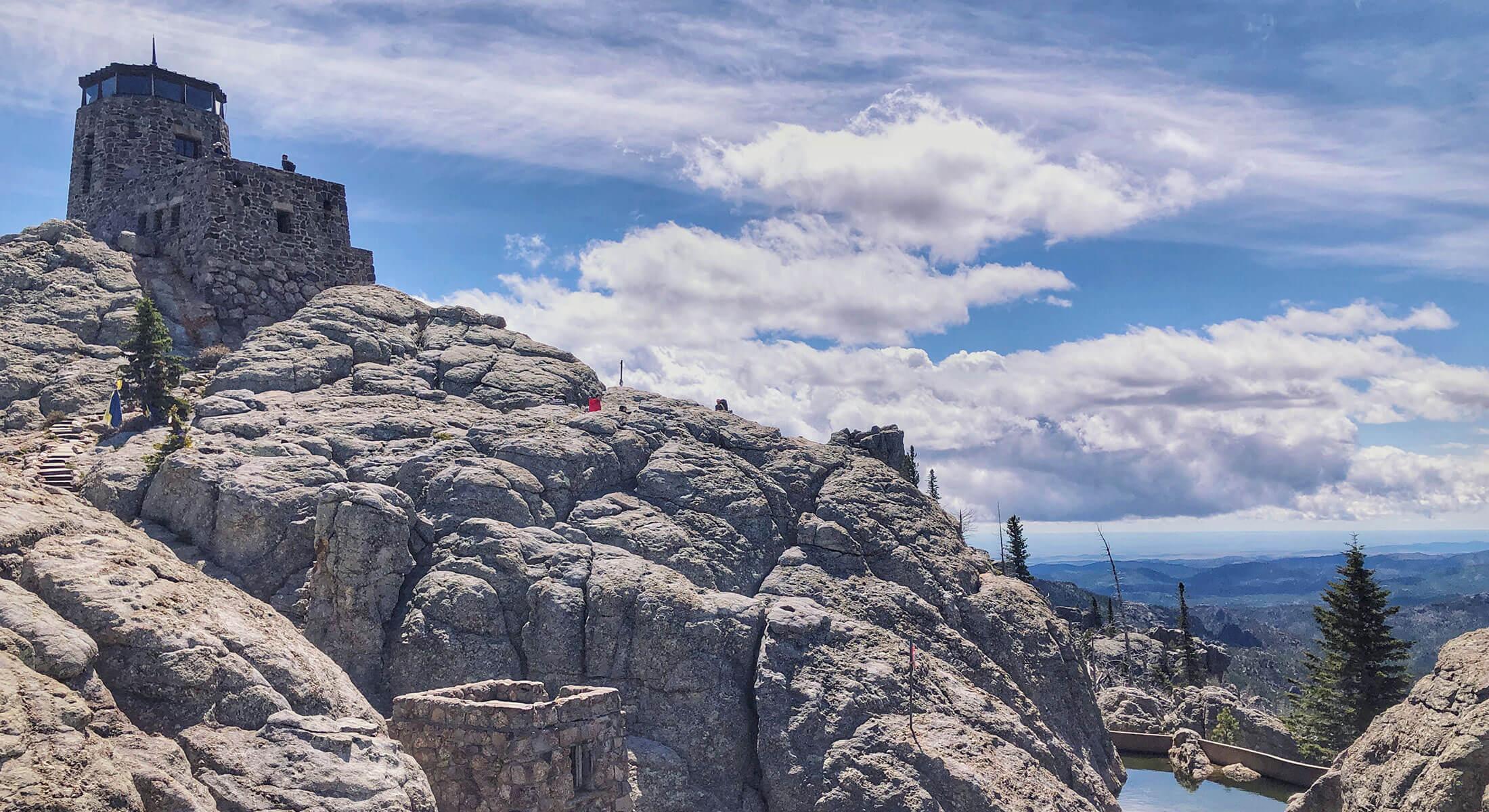 Found on the tallest peak in South Dakota is the Black Elk Peak Fire Tower. After a hike to the summit, visitors can enjoy landscape views of Custer State Park, the Black Hills and beyond. The tower was constructed from 1935 to 1938 using stones gathered from the nearby French Creek. All the materials used to build it had to be carried by people and mules along a three-mile trail to the top. The site is listed on the National Register of Historic Places and makes for a rather nice reward upon reaching the top. 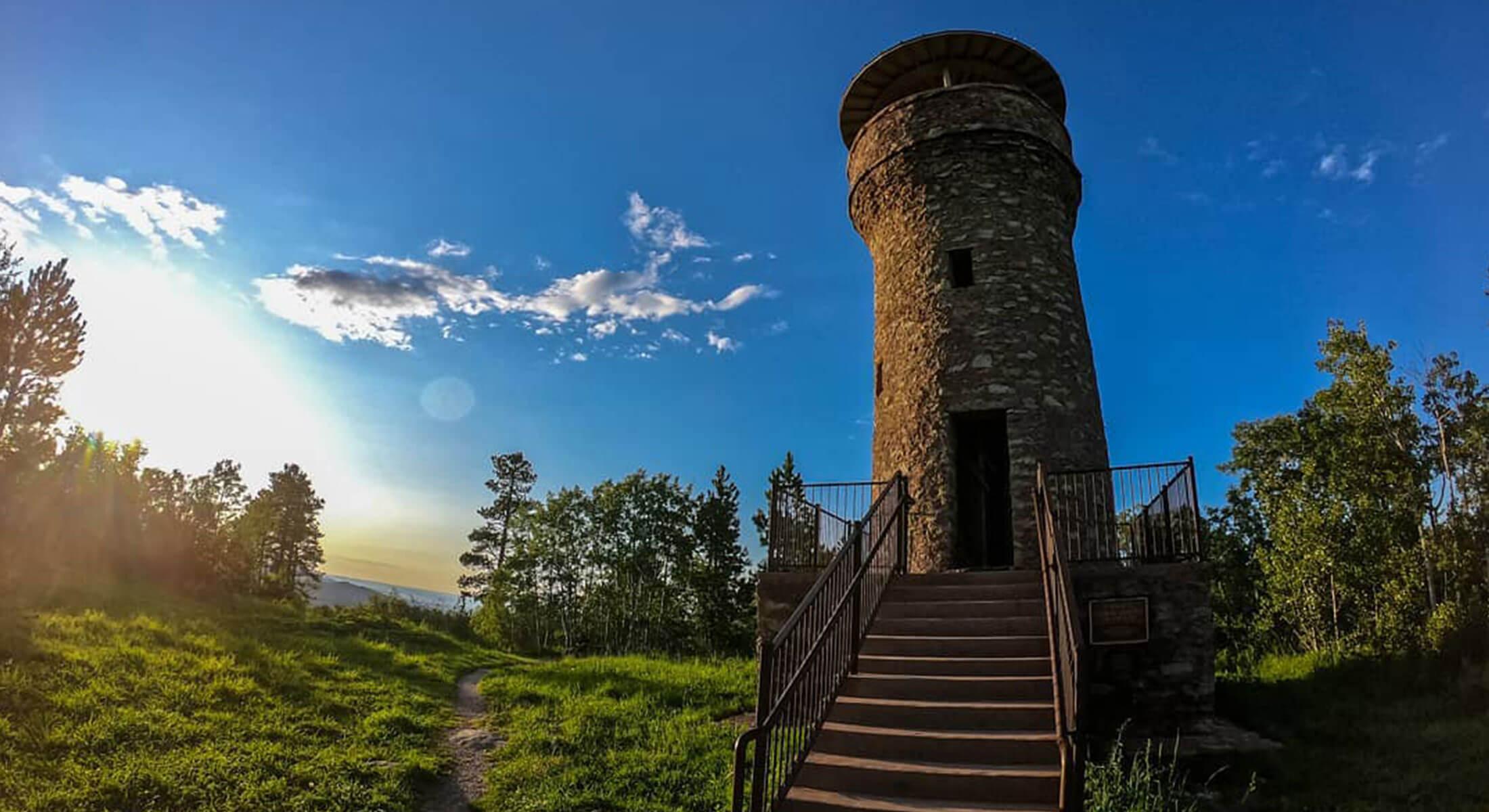 In the place originally called Sheep Mountain, now stands the Mount Roosevelt Friendship Tower, or Friendship Tower for short. This tower was built in 1919 as a memorial to President Theodore Roosevelt by his friend, and famous Deadwood Sheriff, Seth Bullock. The hope was to provide a place where people could come and enjoy the views of the wide-open spaces that both Roosevelt and Bullock loved. In 1966 the Society of Black Hills Pioneers donated the tower to the United States Forest Service and in 2005 it was added to the National Register of Historic Places. 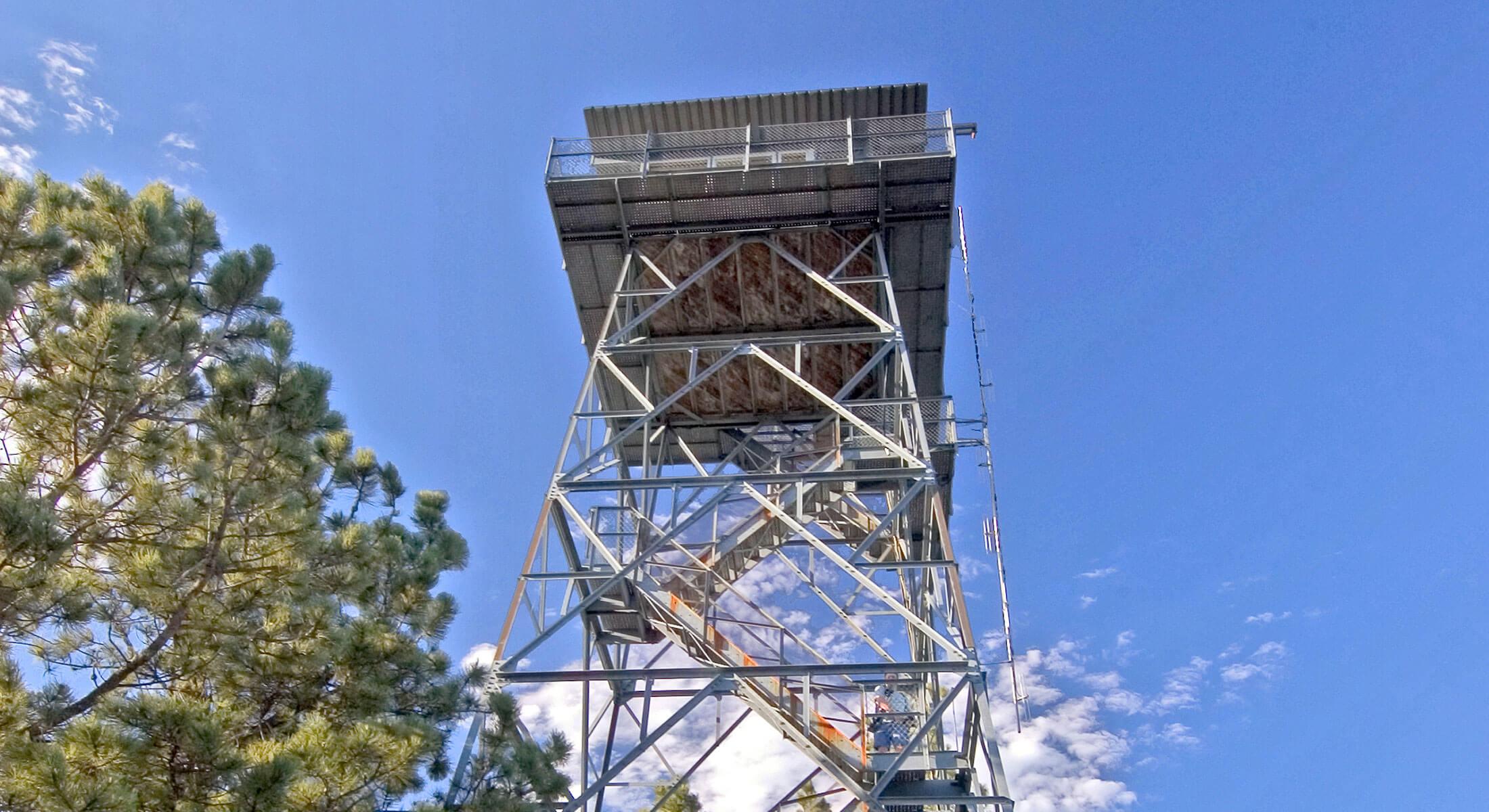 Located in the northwestern section of Wind Cave National Park, the Rankin Ridge Fire Tower was named after the parks first superintendent William A. Rankin. The tower was built in 1956 and sits on the highest point in the park at 5,013 feet. It remained in use during the fire season up until 1998. Today, it is still used periodically to look for fires or to monitor severe weather conditions. Due to safety concerns the public isn’t allowed up in the tower, but the hike and views from where it stands are worth your time. 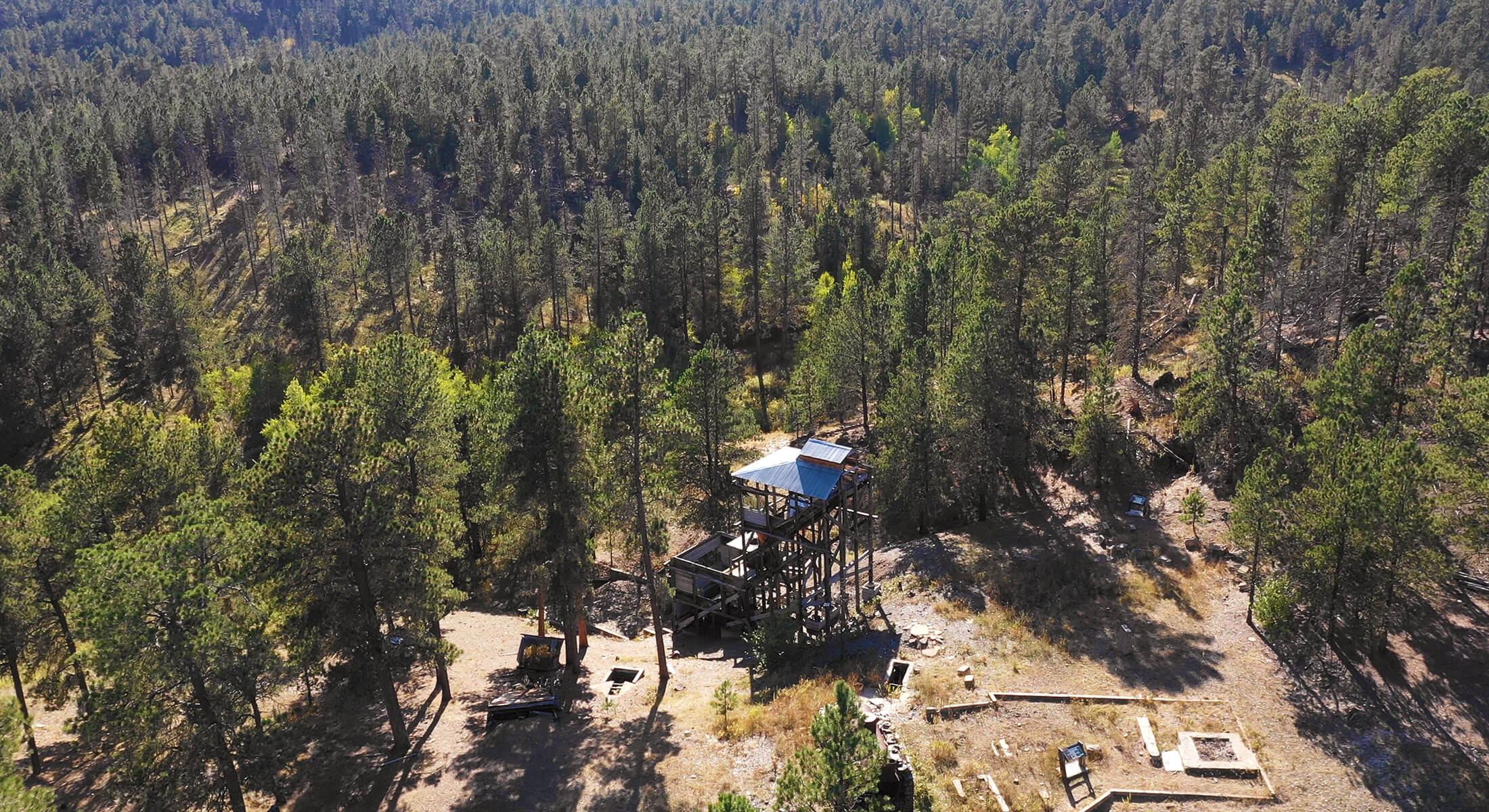 The Gold Mountain Mine is the only mining site left in the Black Hills with the mill frame still standing. Restoration of the site started in 2009 by Forest Service employees and volunteers from the Black Hills Historic Preservation and Trust to make it safe for the public. The original mine was constructed in the 1920s and operated until 1940. 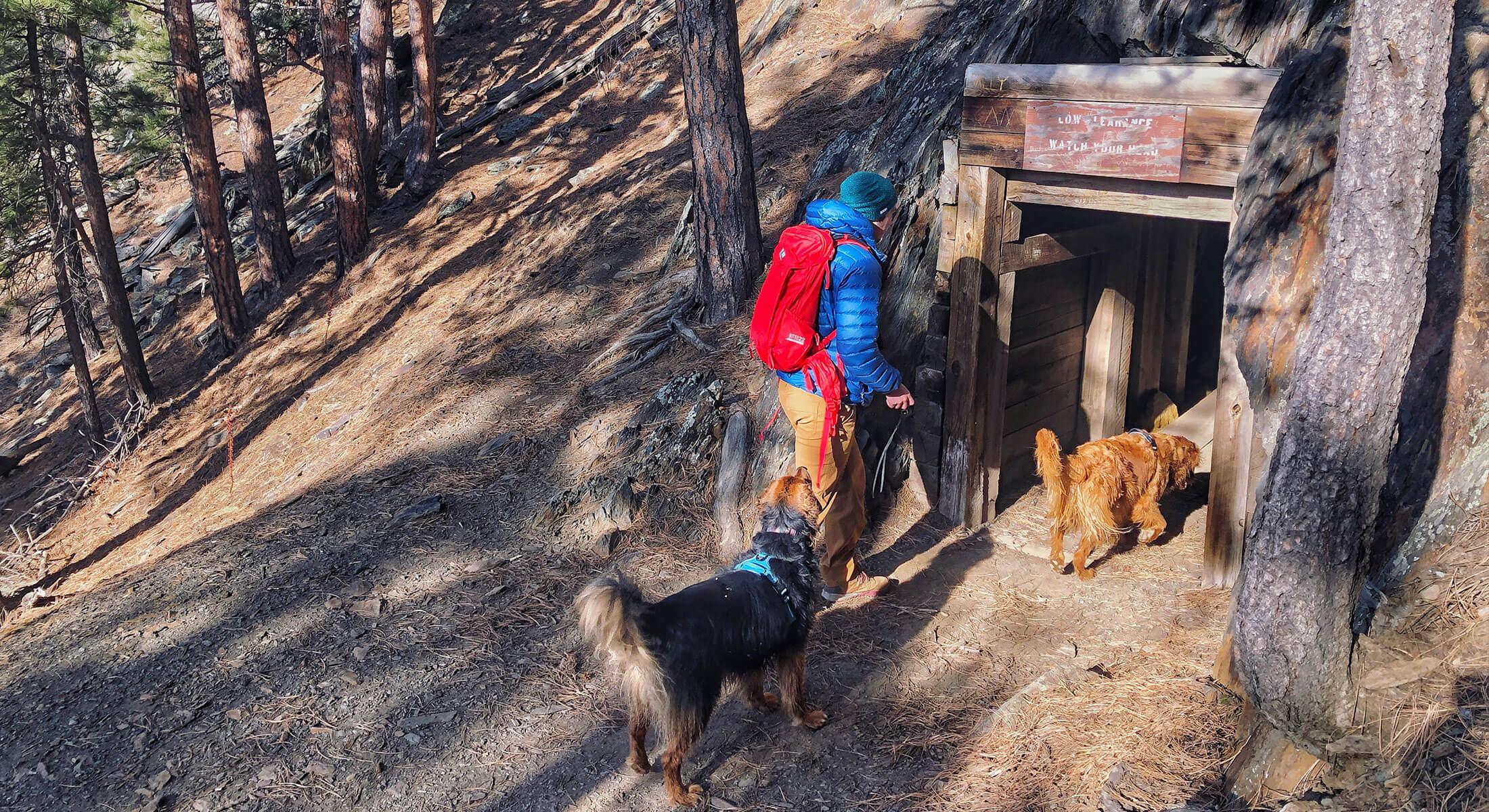 Due to its historical significance the Flume Trail has been designated as a National Recreation Trail, and for good reasons! The Rockerville Flume was used in the 1880s during the mining boom of the Black Hills to carry water from Spring Creek over 20 miles to just outside of Rockerville. The flume operated until 1885 and allowed the miners to make over $20 million in gold! Today the trail follows along the majority of the actual flume bed. During the hike you’ll spot historic artifacts, pass through tunnels, and discover parts of the original flume. I couldn’t think of a more fascinating way to take in such an interesting piece of Black Hills history. 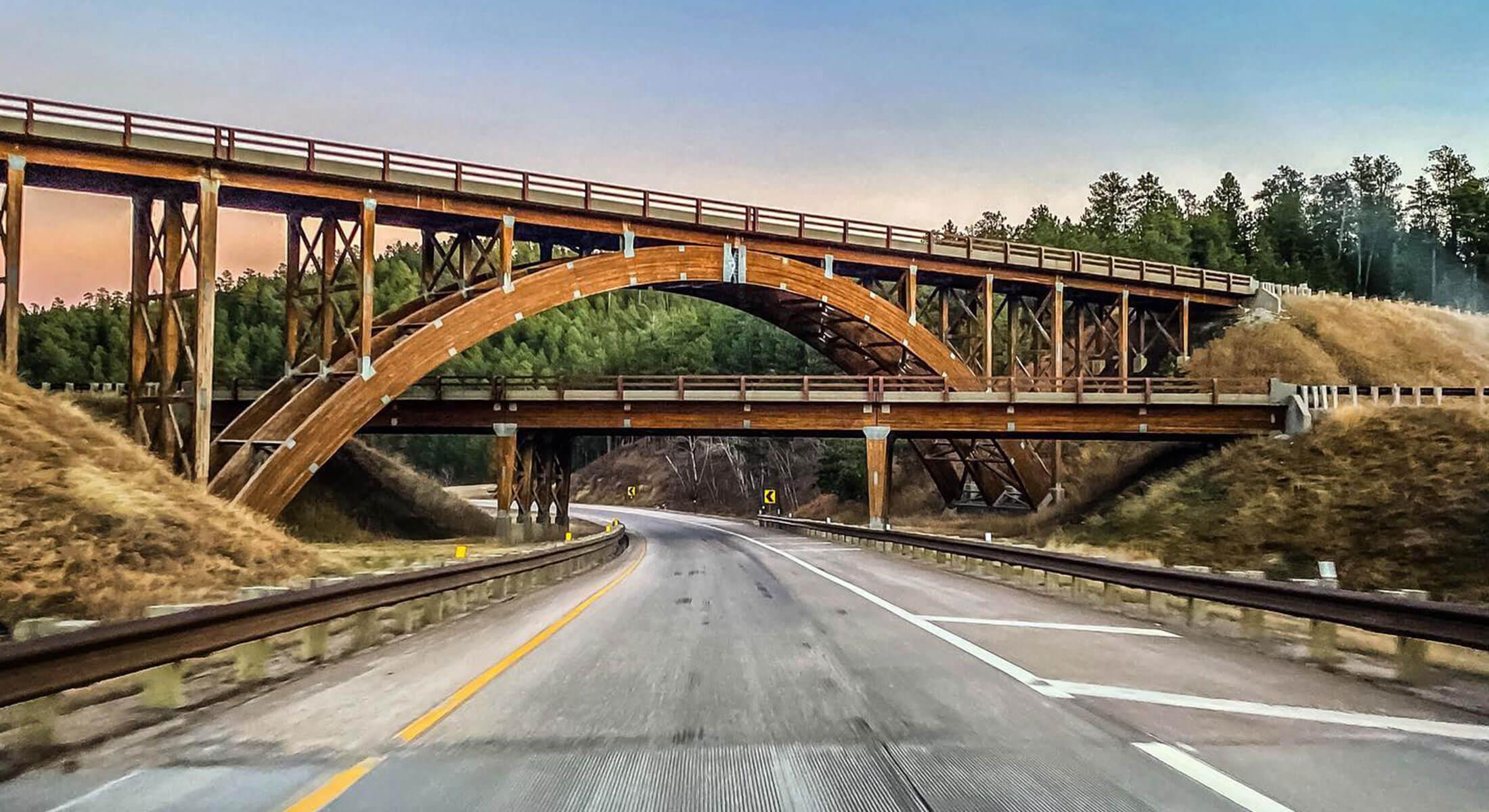 Anyone driving from Rapid City to the Black Hills on Highway 16 (or reverse) will take note of the iconic Keystone Wye Bridge. Built in 1967, this laminated timber arch structure was designed by Clyde Jundt and Kenneth Wilson to harmonize with the natural surroundings. The interesting part about this bridge, and something most people don’t know, is a truck carrying three of the arches to the site for assembly actually turned over. While the pieces seemed in tack the Department of Transportation replaced them to be safe. So what happened to these seemingly perfect pieces? Well you probably drove past those too. They became a landmark of their own forming an arch at the turn-off for the now closed Sitting Bowl Crystal Caverns on Highway 16. 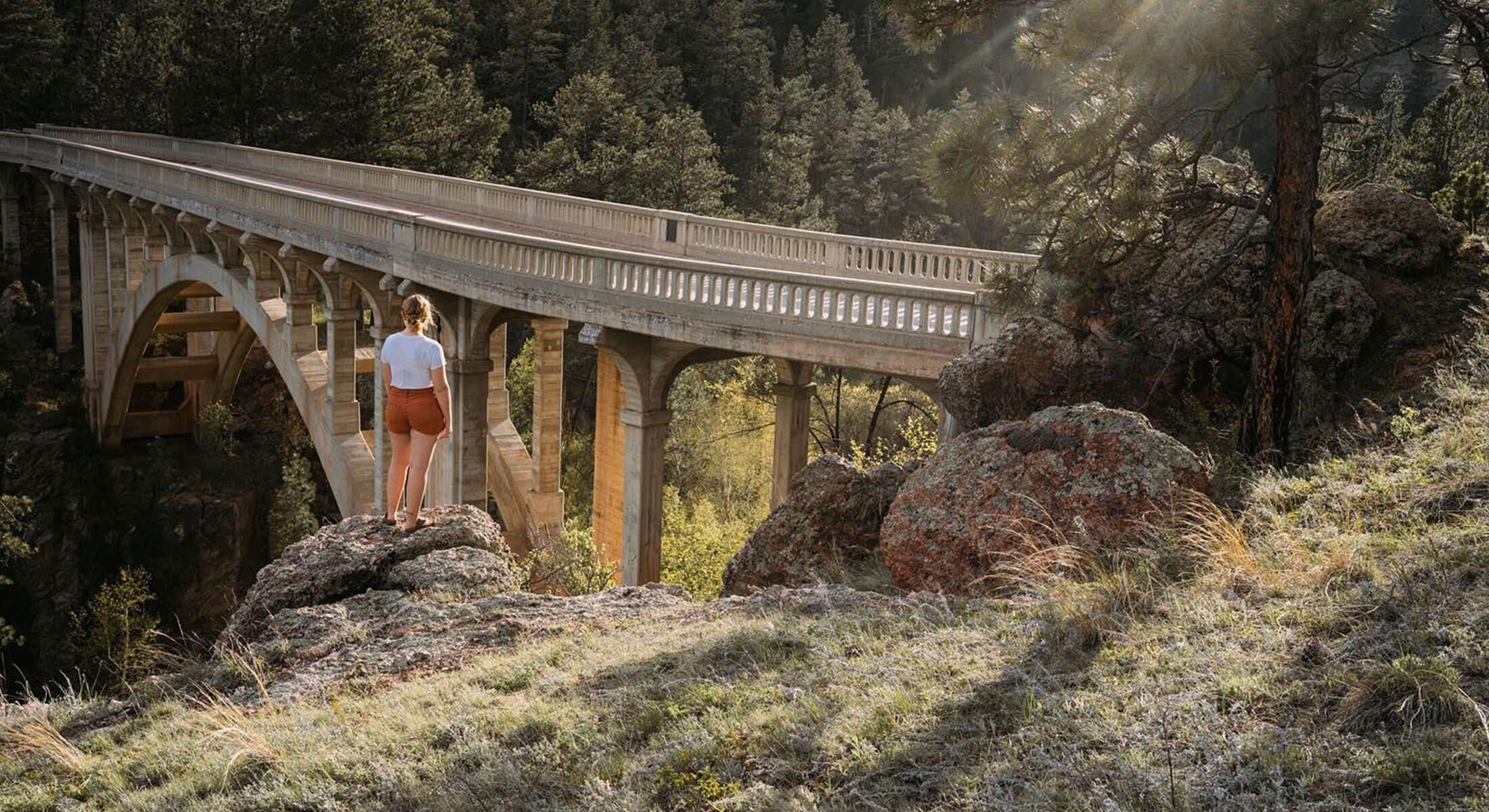 The beautiful Beaver Creek Bridge can be found two miles north of the Wind Cave visitor center on S.D. Highway 87. Spanning one of the two perennial streams that flow through Wind Cave, this bridge was built in 1929 to provide travelers easy access the newly developing Custer State Park. The builders wanted this bridge to create an illusion that the concrete arches emerged naturally from the rock walls of the canyon. It is the only bridge of its particular arch type in South Dakota and when it was built it was the longest and most complex of its kind in the whole state.

Learn more about Rapid City and the Black Hills by following us on social media, and don't forget to use #VisitRapidCity when you post your adventures!