I’m not saying that Rapid City is home to Jurassic Park, but I am saying that seven dinosaurs are still standing here today. Sure, they don’t move. And you won’t have to worry about them eating you (I’m pretty sure). But you do get to climb on them, pose with them and take in beautiful hundred-mile views of the surrounding area with them. If you’ve seen the movie Jurassic Park you know the downsides to seeing real dinosaurs, but at Dinosaur Park there are none. Here’s a little more about the seven creatures you’ll find standing above Rapid City. 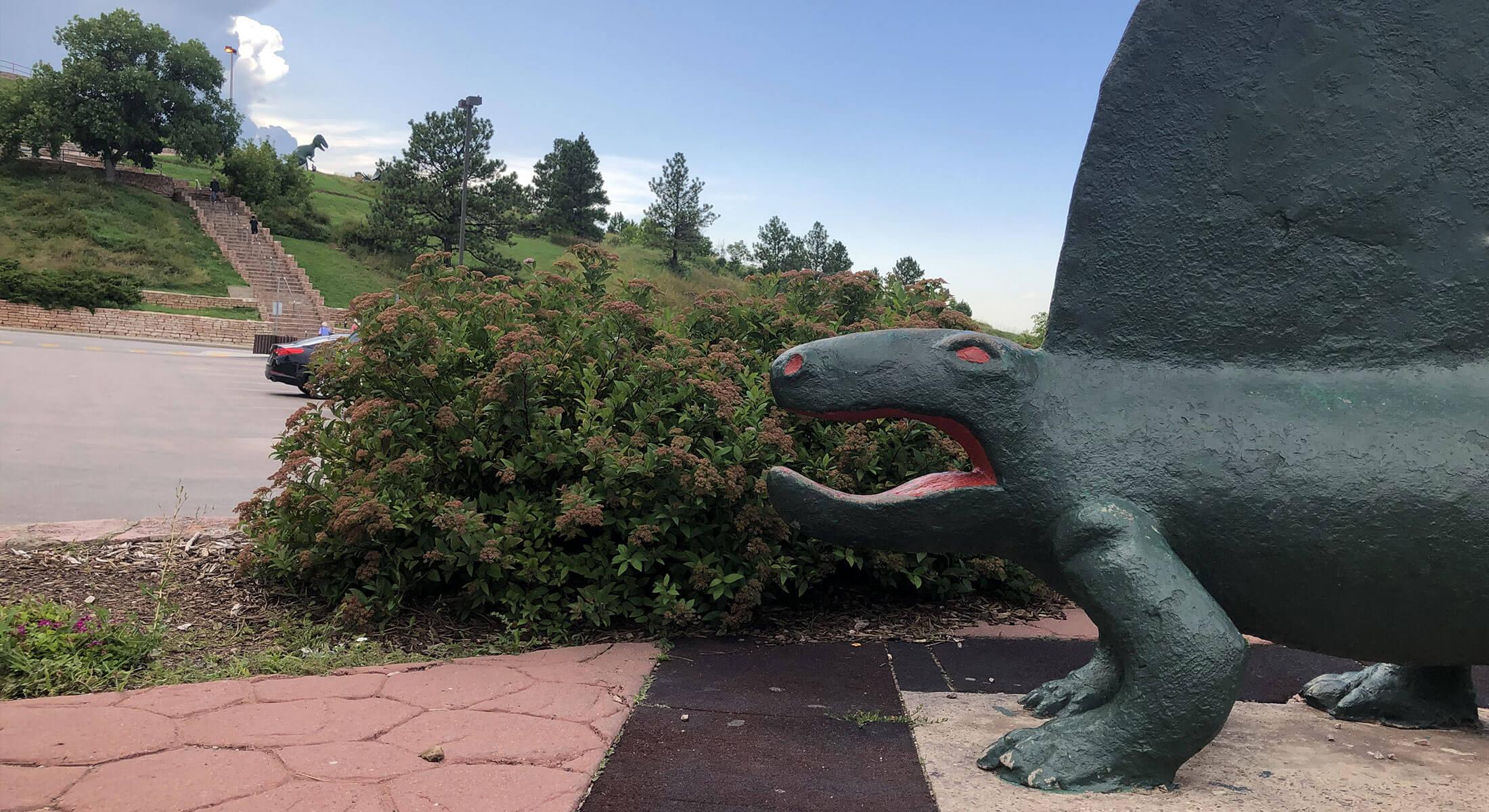 Whether you start or end your visit to Dinosaur Park in the Visitor Center (open seasonally), I would highly recommend checking out the two dinosaurs who reside outside on the front patio before making your way up to the stairs to the others. Not that these guys aren’t cool, they are just smaller in scale than their friends up the hill and serve as a great introduction to the park. First up is the Dimetrodon! Fun fact about him – he’s not really a dinosaur. Shocking I know. This “little” guy is actually a prehistoric reptile that went extinct millions of years before the first dinosaur came about. However, its appearance looks like one of a dinosaur with the large sail on its back that could have been used to regulate body temperature or used for stability. The Dimetrodon is the perfect height for young ones to lean on and pose with! 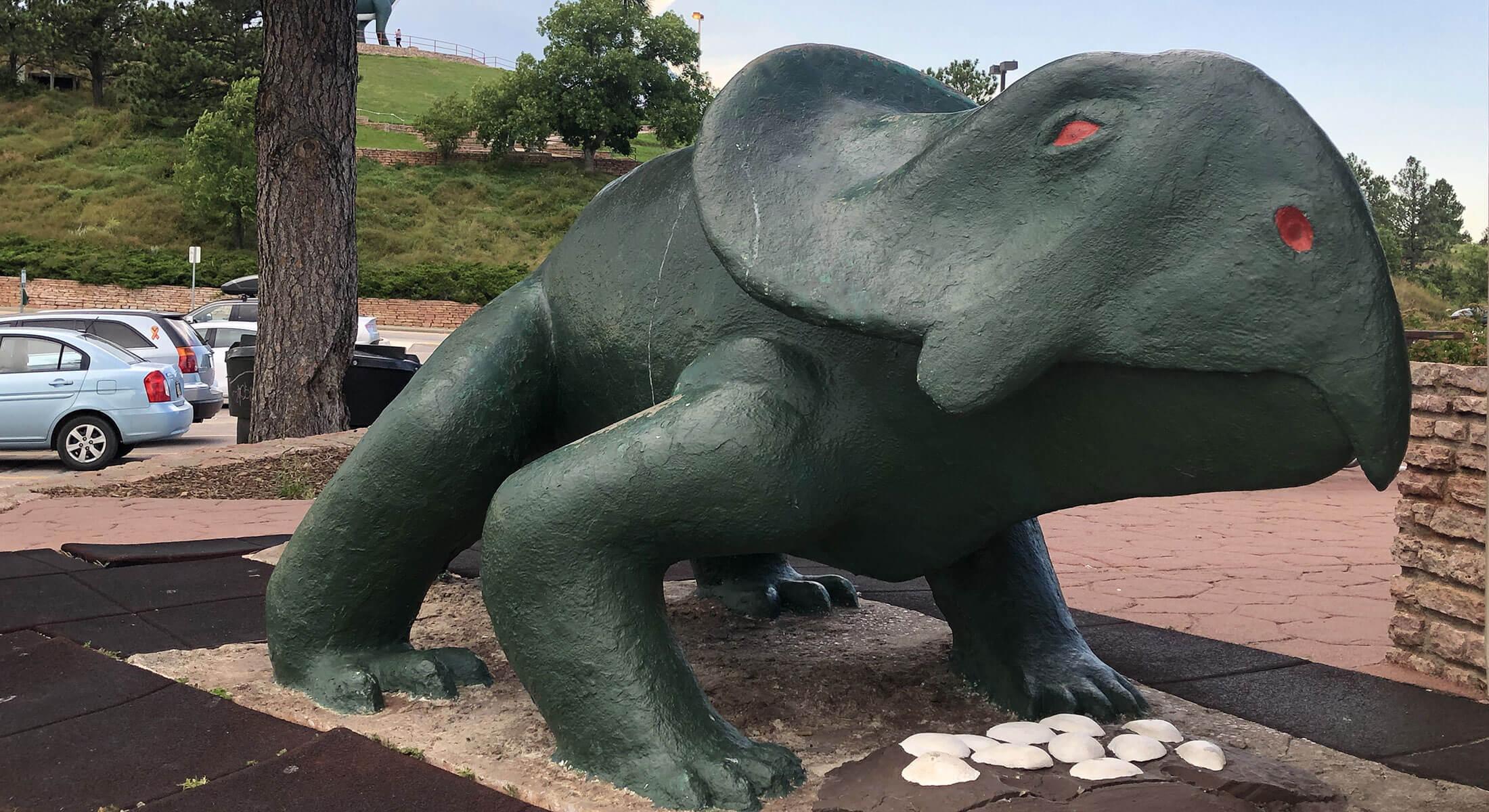 The other green dino hanging out around the Visitor Center is a Protocertops. These little plant eaters are predecessors of the more commonly known Triceratops. Which is why this guy or gal might look somewhat familiar to you. While a similar dinosaur lived in North America, Protocertops were actually only found in Mongolia. Just like with the Dimetrodon, the Protoceratops stands the perfect height for posing and climbing on for one memorable photo! 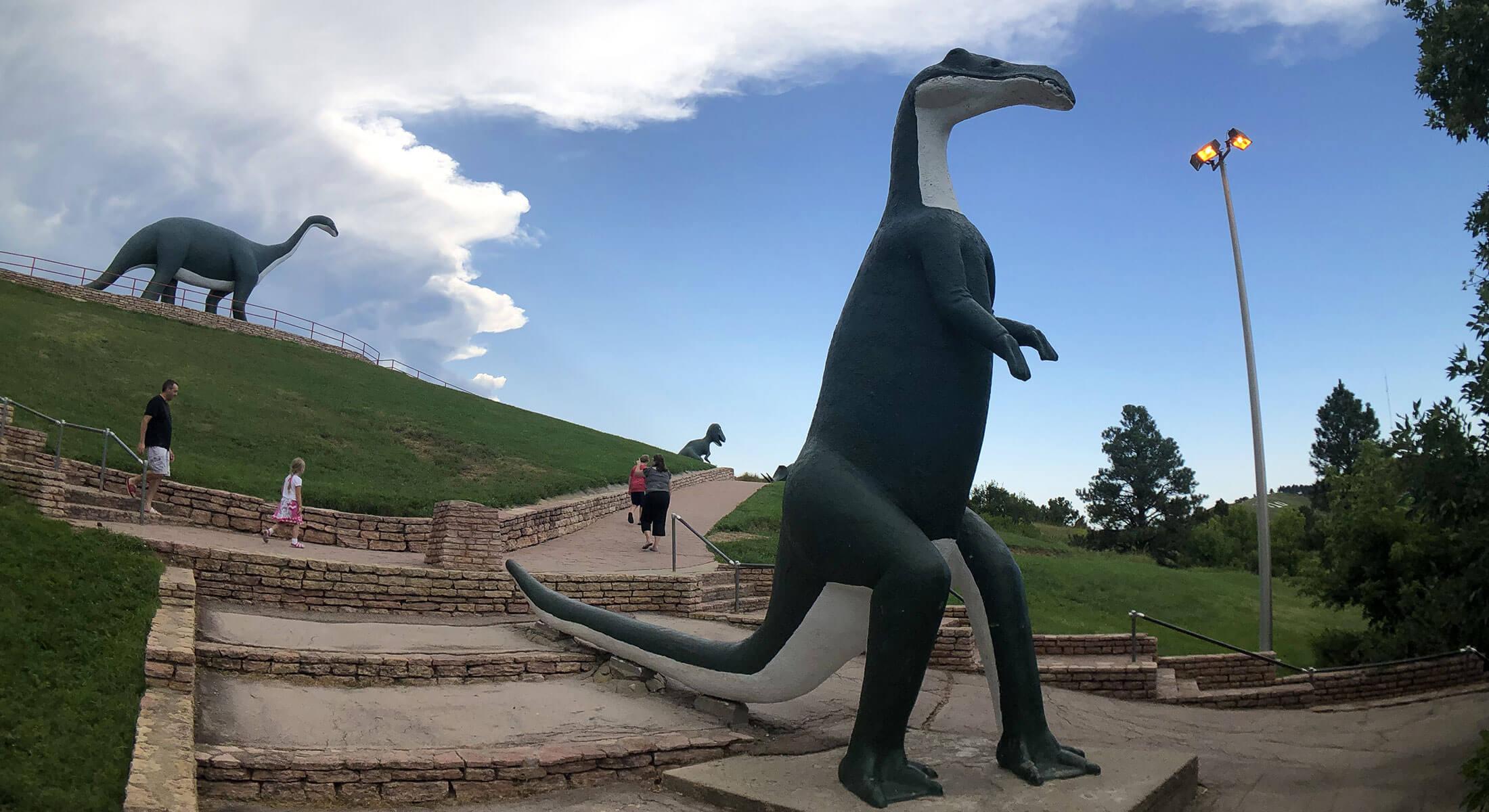 As you make your way across the street and up the stairs, you’ll find the next prehistoric beast waiting, the Anatotitan. Go ahead and try to say that one out loud, because I can’t. I can, however, tell you that it’s means “giant duck”, which is much easier to pronounce. One look at this dinosaur and the name makes total since. It stands on two strong back legs and has a flat beak-like mouth. Time for the fun fact, fossils of this herbivore have actually been found in South Dakota. 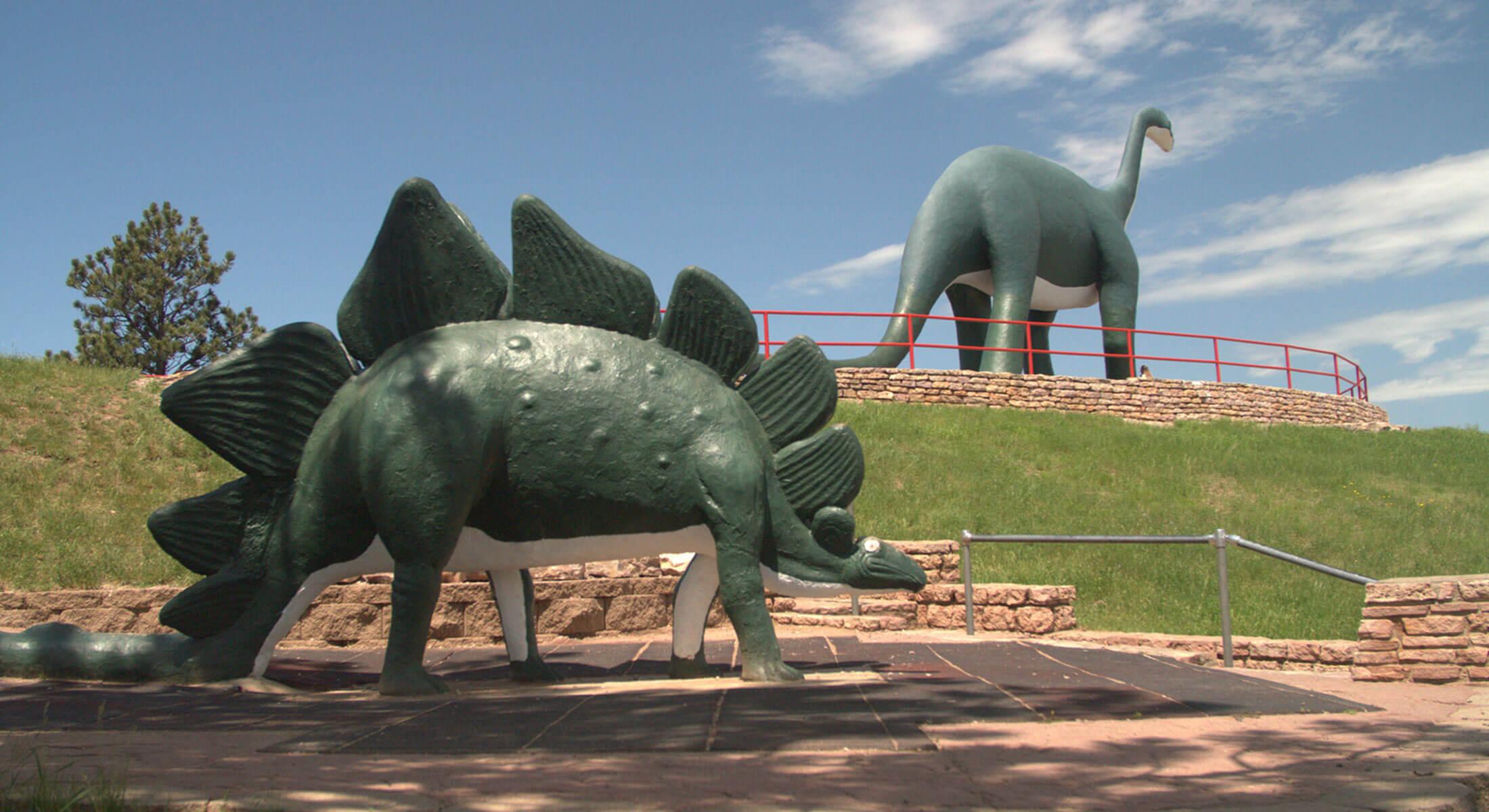 Time to meet a Stegosaurus! Easily recognized by the bony plates embedded along its back, this dinosaur was a slow-moving plant eater that used its powerful tail to protect itself from predators. A common favorite to kids who visit the park thanks to the easy climbing and slide-like formation of the back and tail. You know its gotten a lot of love when the green paint on its back between the blades give way to reveal the concrete underneath. And yes like all the others before him – I recommend you take time to take a photo here as well! 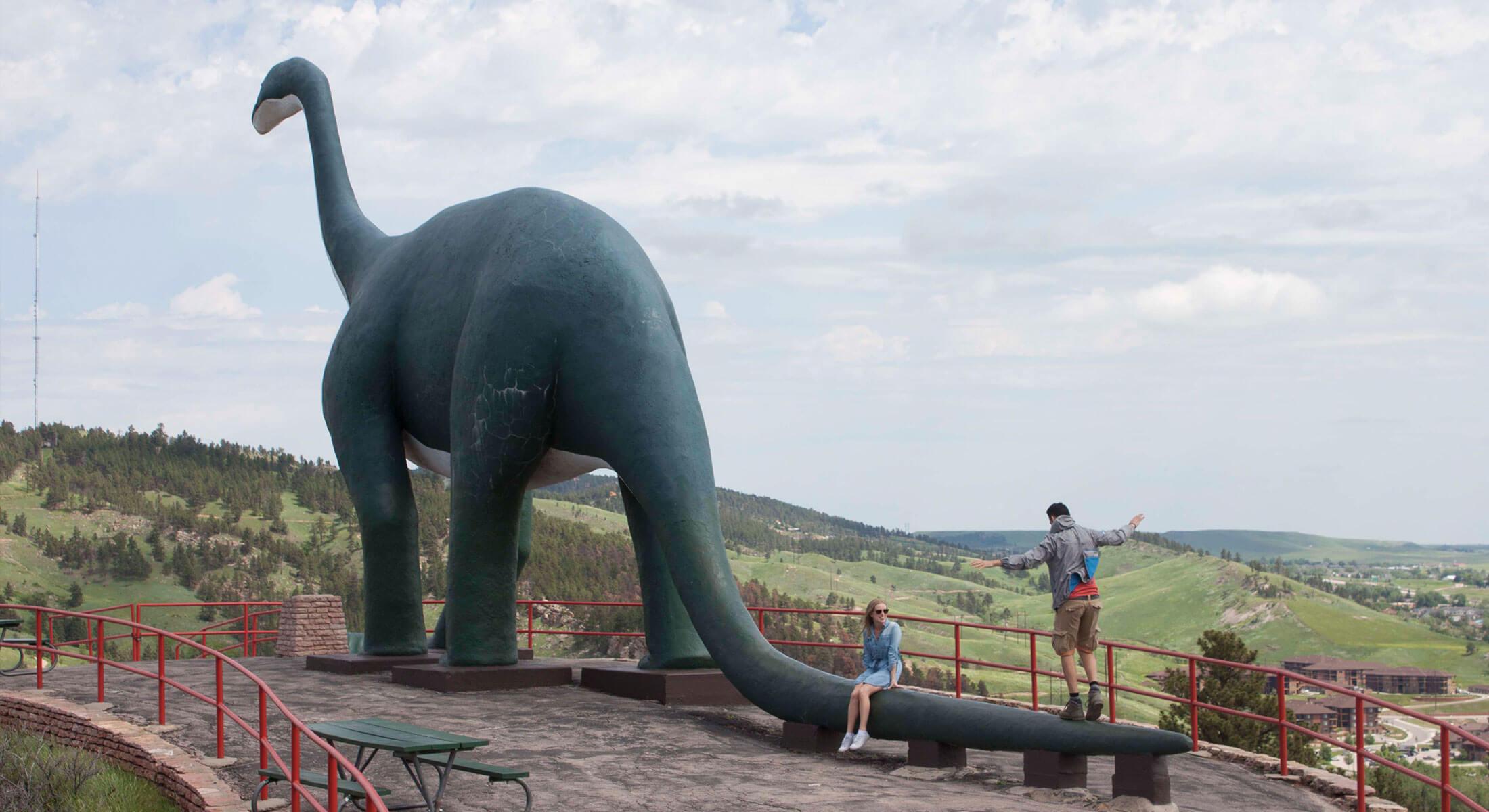 Greeting you at the top of the hill is the guy you can see from all around town. In fact, it’s a game to many local families to “find the dino” while driving around. He’s the beacon of Rapid City standing tall on a ridge that over looks the city and is my personal favorite out of the green guys on the hill. His technical name: Brontosaurus, but will also accept Apatosaurus, Long Neck, or Big Guy. A little bit about this dinosaur: they were plant eaters, was one of the largest land animals to ever exist, and believed to have been a very slow-moving creature due to leg length and estimated body mass. Where this creature stands is also the highest point of Dinosaur Park and the place you should slow your roll and take in those hundred-mile views I mentioned earlier. Rapid City is beautiful from all angles – but this one is the best. 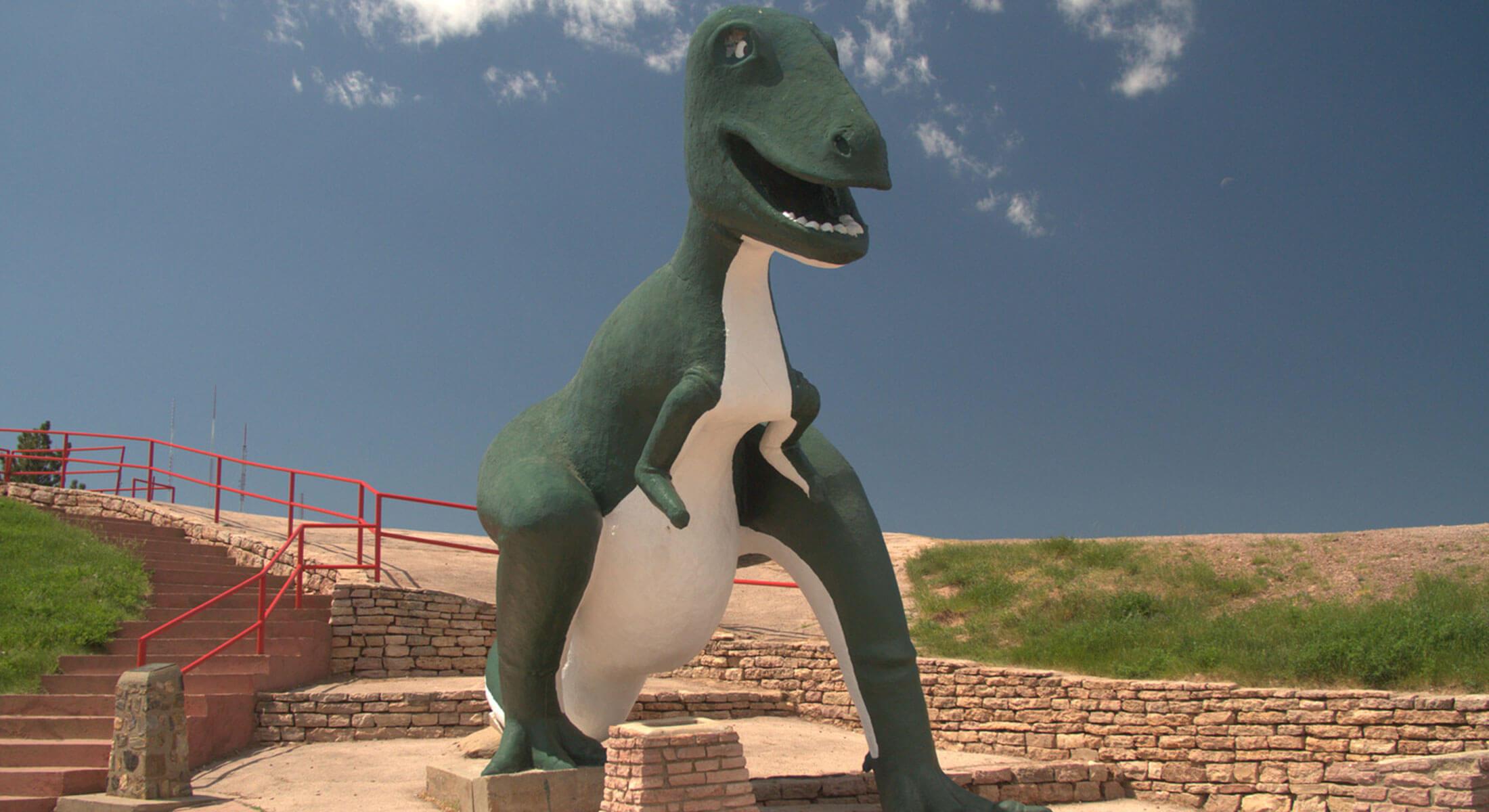 After you’ve taken your fill of views and photos from the top, the next dinosaurs you meet are in what appears to be a stand-off. First of the two is the well-known Tyrannosaurus. This dino is standing in the perfect pose to capture a selfie making it look like you’re being chased by a T-rex. If this dinosaur was the real deal it would be truly terrifying having a 20-foot carnivore standing behind you. But the one at Dinosaur Park is significantly less scary. What can we say – when you hit a certain age you lose your teeth and this guy is in his 80s. 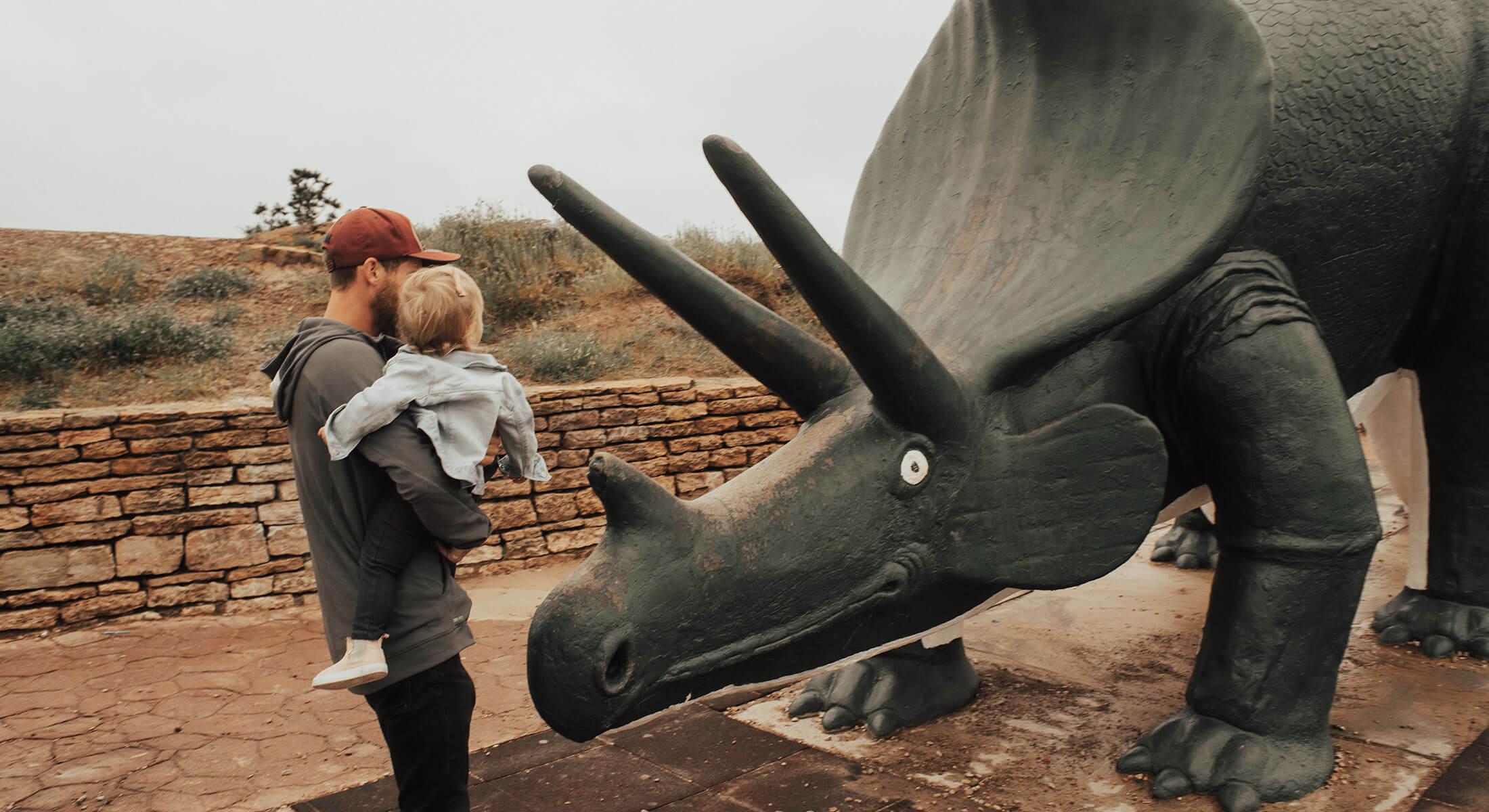 Standing face-to-face with the T-rex is the Triceratops. Triceratops were herbivores that traveled in herds and are considered one of the most recognizable dinosaurs. The three horns of this dinosaur were more than likely used to fend off attacks from a Tyrannousaurus and can most definitely be used to climb up on and pose for one awesome photo.

Dinosaur Park is a quirky attraction Rapid City offers free of charge for all ages to enjoy. Having been built in 1936, the dinosaurs take on a cartoony look now, but the scale of each dinosaur size is generally correct and it is so fun to see in person. Don't forget to stop into the Dinosaur Park Gift Shop. This unique little shop offers some great souvenirs to remind you of time well spent in Rapid City.