Something that I have always loved about the Rapid City area is the rich history here. I am constantly amazed by how many big moments for our state, and even country happened within 100 miles of where I live. The most recent historical moment I experienced was Minuteman Missile National Historic Site located just 70 miles from Rapid City.

I was fortunate enough to visit this amazing historical site with my work family. When we arrived, I was so surprised that it was even there. I grew up near the area and had driven past it probably hundreds of times as a child and had no idea it existed. Hiding the base in plain site was the military's intention. What I found most interesting about the missile site is that the National Park Service has done its best to make it feel like the military never left.

The first place we went in was Delta 01 which served as the living quarters. We saw where the men and women who served slept, ate, and spent their free time when they were not on duty. We learned interesting facts about what life was like and looked around at the dated magazines and furniture that was left behind.

After we had walked through what felt like a flashback to the 90s, we boarded an elevator that brought us to the lower level. This is where it got interesting. We were shown photos of what happened when we signed the treaty, and all of the silos had to be destroyed. We saw the giant cables that were used in the silos and even scale models of the missiles. Finally, we went to the control room.

The control room was the place where a decision that would have changed the future of the country could have been made. It was so cool to see giant computers and hear that my phone held 100 times the technology that all of those giant computers did.

After our tour, we headed down the road to the Visitor’s Center. This place is excellent. The amount of history that is documented here made my little nerd heart jump for joy. The center has videos about the cold war, old life magazines, and even an old television set that loops old cartoon duck and cover PSAs.

Take some time during your summer vacation to check out the history in the area. Minuteman Missile National Historic Site is just one in a long line of amazing historical places in Rapid City. As always, don’t forget to share your BIG historical moments with us at @VisitRapidCity using #VisitRapidCity.

Things To Know About Our Area Parks And Monuments 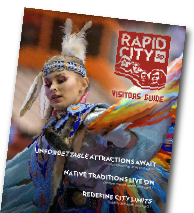